It seems so long ago, but just over a month ago the Australian National Junior team fell just short in Sofia, Bulgaria losing in the Gold Medal game for the second year in a row.

The Aussies started the tournament against South Africa. The team didn’t start the game with the same intensity as their training camp in Liberec, Czech Republic. The Aussies were down 1-0 at the end of the first period having only taken six shots on the South African net. During the ice-cut the coaches had some words to say in the dressing room and as a result the boys stepped up outshooting the South Africans 16-0 in the second period and scoring 5 unanswered goals to take a 5-1 lead. The third period was an even affair with both teams tying for shots (8-8) and the Aussies would finish with one more goal in the third to win that period and win the game 6-1.

The next day it was Australia vs Chinese Taipei. The team recovered fine with no injuries against South Africa. This game was a lot tighter than the overall score line suggested. Chinese Taipei whilst small were quick and they took it to the Aussies. Their goal tender faced an onslaught the whole game facing 37 shots for five goals. Similar to the first game the Aussies did most of the damage in the second period, this time it was four unanswered goals from 14 shots. In the third period the Aussies took their foot of the gas and Taipei outshot the team 9 to 6 and managed to keep us to the lone goal in the third. Aussie veteran goalie Seb Woodlands earning the shutout.

A day off and the team headed up the mountain for some fun in the sun snow. After a 40-minute gondola ride to the top of the mountain the boys were able to stretch their legs and roll around in the snow. It was a good chance to get out of the hotel and throw some snowballs at each other.

Day four and it was the top of the round clash versus a strong team from Turkey. Turkey has defeated South Africa 6-1 (same score line as us) and defeated Chinese Taipei 3-0. The Aussies started poorly; it was becoming evident that we were a slow starting team that did most of the damage in the second period. The first period we were outshot 12 to 8 and the Turks were on the board first on the power play.

It was back to the dressing room and some more positive reinforcement to reenergise the team and they came out in the second period scoring 3 goals, one even strength, one power play and one short-handed. AGAIN the third period the boys seem to take their foot off the gas and allowed Turkey to steal a goal 3:29 into the third period however the Aussies would shut it down and steal the win in a fast game 3-2.

Wahoo, the Aussies finish top of Pool B and move into the Semi Finals and place the second seed of pool A who would later become Mexico. The boys in white knew they had their work cut out for them as Mexico was the team that dropped from Division II to Division III and was looking to move up. After another day off, it gave the team a chance to study more video of their opponents and time for some more team bonding. Connor Lee had been struck down by gastro and would never really recover for the rest of the tournament. Connor dug deep to play but his energy levels took a huge toll on his body and his speed was sacrificed.

The semi-final was here and what a game it was. Mexico came out flying, scoring 2:37 into the game and then again at the 7-minute mark to take a 2-0 lead. Perhaps this was the spark the Aussies needed who would rally for three goals to finish off the period and outshoot the Mexicans 9 to 3 and up 3-2 on the scoreboard.

Aussie goalie Seb Woodlands knew he had to be better allowing 2 goals on 3 shots and the second period would see the tables turn. The Mexicans would outshoot the Aussies 11 to 6 but it was the Australian Captain Kenshin Hayashi that would do all the damage scoring three goals in the second period to make four in total.

The third period saw the Australians regain the shot count outshooting the Mexicans 9 to 6 and the Aussies weren’t done, already up 6-2 the team kept rolling scoring another two goals to take an 8-2 lead. Some sloppy play with four and half minutes remaining saw two Aussies head to the box for some 2-minute minor penalties and gifted the Mexicans a late power play goal. The semi-final would finish 8-3 to the Australian team and a medal in the 2020 Division III World Championships.

The gold medal game was here, and the team had to face a quick, big and touch Iceland team. Iceland had followed the same path disposing of every team in their wake. The went through undefeated in Pool A defeating Bulgaria (4-3), New Zealand (10-1), Mexico (5-2) and in their respective semi-final defeated Turkey 5-2.

They were fast and disciplined but we had a game plan that would counter act this play. Unfortunately, it didn’t work to plan and they outshot us 26-16. The game started off according to plan, the players were buying into the system, clearing the puck out of the quickly however a small error by the Aussie defence saw Iceland score with 1:52 remaining in the first period to take a 1-0 lead into the break.

History was on our side; we knew we were a second period team. 2:07 into the second period we were gifted with a power play as Iceland served a two-minute minor for ‘too many players’ on the ice. 40 seconds later the Aussies were left shaking their head when Iceland shifted the momentum back in their favour as they scored a short-handed goal through Axel Orongan (highest point scorer) and easily the fastest guy in the tournament. This broke the Aussies back and we were never able to recover from this. Orongan would then score on the power play 6:20 remaining in the second period and the team was down 3-0 going into the third period.

The coaches rallied behind the players, tried to get inside their heads and shift the momentum our way however the first whistle of the third period (17 seconds in) Iceland scored and the team could feel the game slipping out of reach. Three minutes later Jack Ransome took some of the load off the top six forwards and scored his second goal of the tournament to give the Aussies some hope however we could never recover, and Iceland was awarded the Gold Medal and promotion to division II.

Jake Riley was named Australian best player of the tournament. 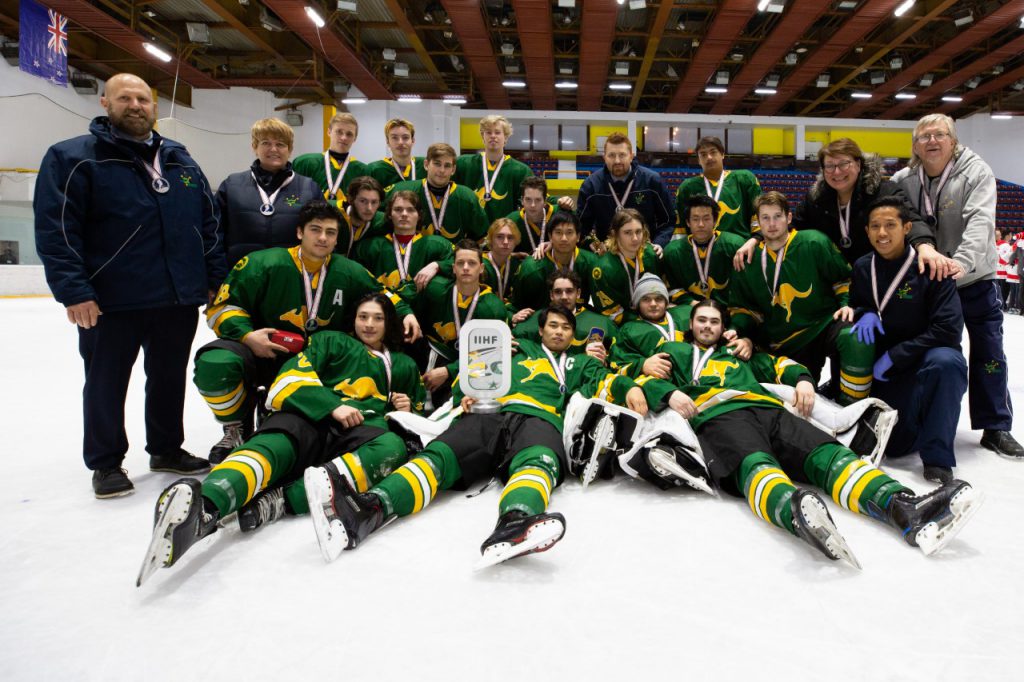