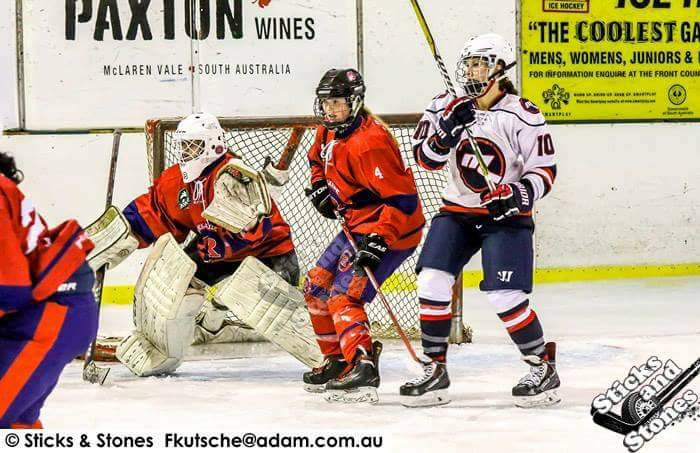 Melbourne Ice travelled to Adelaide’s IceArenA for both teams final weekend of games prior to the Christmas break. From the outset, the game was played with high intensity, no doubt partly due to the Adelaide Rush supporting a new found confidence after a historic, 4-2 victory in the previous round against the Brisbane Goannas. That win marked the first win in the clubs two-year history. Whereas, the Melbourne Ice had suffered two consecutive defeats in their last weekend of play against the team that appears the one to beat again this season, the Sydney Sirens.

From the game starting face-off, the pressure was high and the puck was hot, until a break in play, leading to a Melbourne penalty, after an incident that saw Melbourne Ice’s Hope Newman sent off. Adelaide Rush capitalised on this, scoring the first goal of the match within the first five minutes of play. It came through forward Tess Reynolds, who scored from close proximity. Reynolds tried to better her last effort a few moments later shooting from a tight angle to try to get her second but it resulted in a desperate save by the Melbourne Ice goalie, Jenelle Carson. The determined and desperate attempt by Carson caused the puck to fly outside the field of play. At the other end of the ice, the Adelaide Rush goalie, Keesha Atkins was terrific, managing save after save and withstanding the ongoing pressure from the would be Melbourne Ice goal scorers. However, with four minutes to play in the opening period, Jessica Pinkerton scored Melbourne’s first goal, levelling the scores coming into the break.

Neither team managed to challenge the scorer, despite numerous opportunities in the second period, demonstrating it was very much an arm wrestle. Well, if an arm wrestle was played with lots of protective gear, sticks and on ice. Perhaps it was not an arm wrestle but whatever it was, it set up for a grandstand finish going into the final period.

The score deadlock was broken in the opening minutes of the final period with Christina Julien’s goal putting Melbourne Ice in front with fifteen minutes left of play. This meant Rush needed a goal to force a shootout or two to win outright. There were certainly some chances, most notably Candice Mitchell’s shot from long range that would have gone into the back of the net if it was not for the quick reflexes of Melbourne Ice’s goalie, Jenelle Carson.

Then Adelaide Rush forward Ashley Pelkey struck, nailing the critical goal that made it anyone’s game with just five minutes to go and the scores tied. However, almost immediately Kirtsy Venus’ on goal opportunity was foiled and an end to end play by Melbourne Ice resulted in a stunning Shona Powell goal and presumably a victory for the visitors.

However, the game was far from over, certainly in the minds of the Adelaide Rush players. As what followed was a frantic two minutes of ice hockey as tempers began to flare between Adelaide Rush’s Kirsty Venus and Melbourne Ice’s Krystyn Raymundo. Shortly afterwards, Christina Julien was sent off for holding the puck despite pleading with the referee for reconsideration. This left Melbourne Ice a player down in the most critical moments of the game. It is then that a time out was called by Adelaide Rush with a mere minute and 48 seconds left to play.

This final minute and 48 seconds was intense for all involved, spectators included, with Melbourne Ice’s one goal lead sitting on a knife’s edge. But as Kirsty Venus eleventh hour shot on goal fell agonisingly close, bouncing off the corner of the goals with just seconds remaining, Adelaide Rush fell just short with Melbourne Ice winning in dramatic fashion, 3-2.

The second game of the weekend started in a red, blue and white flash as Adelaide Rush scored the first two goals of the game in quick succession in the first five minutes of the game. The goals came courtesy of Adelaide Rush forwards Tess Reynolds and Natalie Ayris and immediately Melbourne Ice were on the back-foot while the confidence of the Adelaide Rush players was growing exponentially. Tess Reynolds was not satisfied with just one in the back of the net. She scored her second before the first period was out, to bring her weekend total to three and all of a sudden with a 3-0 score line, Melbourne were in considerable trouble, so early in the game.

Melbourne Ice had to respond and the play started to get a bit more physical as both sides fought for puck possession. A play incident saw Rush star, Kirsty Venus driven into the wall which resulted in Melbourne Ice’s Nicole Jones spending two minutes in the penalty box. However, she was able to redeem herself in the second period scoring Melbourne Ice’s allusive first goal. Or so we thought. Jones and her team mates celebrations were short lived as the goal was somewhat controversially disallowed because it was found the puck came off her skate rather than her stick. To rub salt into the wounds Jones was sent off again shortly after, during which time Kirsty Venus was able to score Rush’s fourth goal, maximising the advantage gained from the extra Rush player.

Finally, Ice were able to score that much needed first goal – that was not disallowed – thanks to the efforts of Christina Julien and just like that they were back in it. Another goal from Marnie Pullen soon after, confirmed this, as by now the margin was back to two goals with just one period to play.

Little did we know that those goals were only the beginning as what followed was an ice avalanche in the final period the likes of which few have seen. Melbourne Ice scored five goals to nothing in the final period to not just snatch a remarkable victory from the jaws of defeat but completely run away with it. Ice sensationally scored the last seven goals of the game. Seven! All of Adelaide Rush’s good work in the first two period was undone as Melbourne Ice broke down their entire defence structure. Christina Julien scored two of Ice’s final period goals while Shona Powell and Marnie Pullen were amongst Melbourne Ice’s last period goal frenzy.

The two victories over the weekend temporarily catapult Melbourne Ice to equal top of the AWIHL ladder with the reigning champions, the Sydney Sirens.