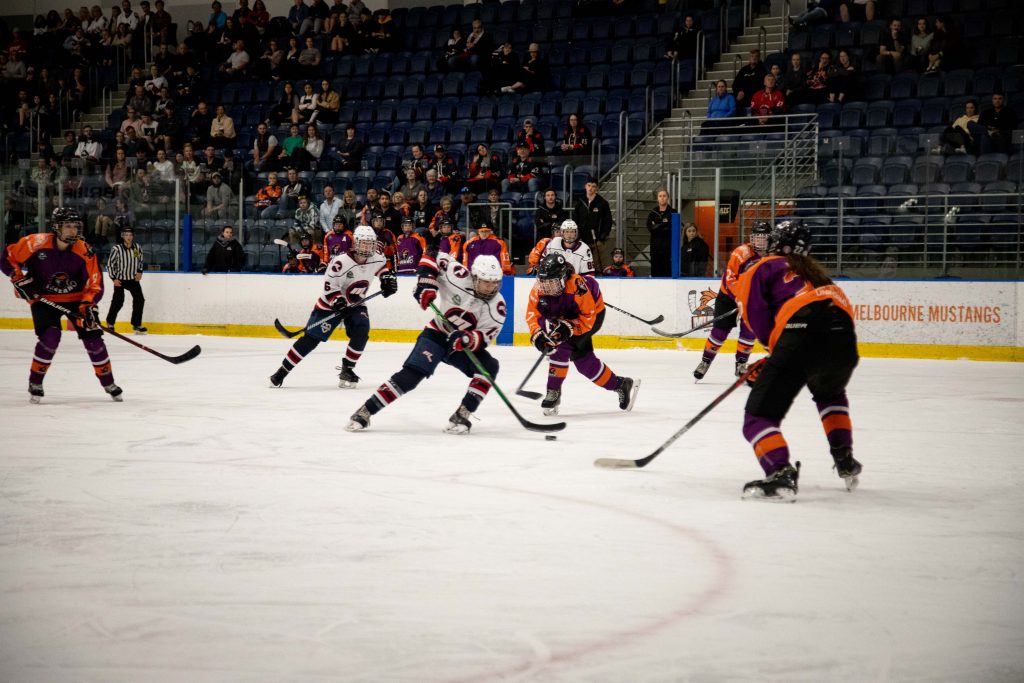 The Melbourne Ice have defeated the Perth Inferno 4-3 on home ice to secure their bronze placement for the 2019-20 season. Two rookie netminders got the start with Sasha King and Makayla Peers between the pipes for Perth and Melbourne respectively.

Melbourne started well early, an end to end rush by defender Megan Eady drawing a hooking penalty from Michelle Clark-Crumpton just 25 seconds into the match. This was a theme for the first period, four penalties were called, an Inferno player finding themselves in the penalty box in each instance.

Melbourne spent swathes of time in the offensive zone; King had to be superb in net to keep it a scoreless contest.

Following one sequence where King was forced into making three saves in quick succession, Perth managed to skate the puck out and dump it into the Melbourne zone. The forechecking Inferno forwards pressured the Ice and created a turnover, Nora Maclaine picking off the pass in the middle of the ice above the circles, and was able to skate in on Peers before ripping a shot from between the hash marks top-corner glove-side. The Inferno made their first shot of the game count, 1-0 Perth at 11:34.

The goal went straight to the Inferno legs, and Perth were able to generate some offensive zone time, Maclaine toe-dragging multiple players in succession. Another two penalties called on the Inferno broke up their momentum and the rest of the period was played in the Inferno end of the rink. However, King perpetually frustrated the Ice with timely saves, and Lesleigh Bower broke up multiple rushes from Ice superstar import Christina Julien.

At the end of the period, Melbourne generated 12 shots (66.7% shot share), and Perth put 6 shots on net (33.3% shot share). Despite being outshot, in large part due to having to kill off four penalties, the Inferno led the Ice 1-0 after 20 minutes of play.

The second period would remain penalty free until the final minute and the game benefitted as a result of the refs putting the whistles away. Sasha King showed off her athleticism, making the splits to keep out a one-timer opportunity. She appeared to be stuck in position, requiring the assistance of a team mate to help her out. I would require an ambulance and a team of physiotherapists if my body was similarly contorted for any length of time.

Peers had to be spectacular to deny Courtney Moulton. Maclaine’s vision and breakout pass sent Moulton in all alone on Peers. As a spectator, I assumed the puck rolled off Moulton’s stick when she went to the backhand. However, now that I have seen the replay, Peers somehow manages to block the shot with her stick.

Just two minutes later and Melbourne had their first lead of the match. Niamh Gallacher scoring her first ever goal in the AWIHL, and what a time to do it. Shona Green found her all alone at the back door with a wonderful cross-crease pass. Gallacher’s second swipe lifted the puck over the lunging King and into the net. 2-1 Ice, Gallacher with the goal with assists to Green and Marnie Pullin.

Free-flowing hockey followed with both teams generating chances on two-on-one opportunities. Eady once again carried the puck from her own end and used her blazing speed to generate an unimpeded shot on King, but King was equal to the shot. Off the ensuing faceoff in the Inferno’s end, Inferno forward Nikki Sharp stole the puck off the Ice defender at the blueline and skated in on Peers on a two-on-one with Elizabeth Scala. With the Ice defender taking away the passing option, Sharp didn’t have a lot of net to shoot at. However, the sharp-shooting Sharp found a tiny gap above Peers’ blocker-side shoulder and parity was restored at 2-2, unassisted at 6:09.

Perth would not have much time to enjoy the tying goal, just 1:47 later Marnie Pullin restored Melbourne’s lead. The young forward picked up a loose puck just inside the blueline and was able to skate in alone on King before ripping a shot glove side and into the back of the net. 3-2 Melbourne at 4:22 unassisted.

Perth finished the period on their first powerplay of the game, but Peers ensured the Ice exited with the lead, making some solid saves as time expired. Shots were a lot closer in the second frame, Melbourne with 13 shots and Perth with 12. Melbourne had the advantage of shot-share with 52% for the period and 58% for the match.

Perth were unable to capitalise on their punctuated powerplay and found themselves having to absorb Melbourne pressure immediately afterwards.

Melbourne doubled their lead after spending what seemed like an aeon in the Inferno zone. The Ice were able to outnumber the Inferno defenders down low and Aparicio had the time and space to take two whacks at Julien’s centering pass before popping it past a sprawling King. 4-2 at 17:10, Aparicio from Julien.

A five-on-three Inferno powerplay led to a fantastic chance for … the Ice. After a blocked shot in the Ice end of the rink, Georgia Moore was left with 50 metres of clear ice between her and King. Skating in alone she went to the forehand but King did well to track her movements and make the save while falling backwards to the ice, squeezing the puck between her arm and body.

Perth were unable to generate anything other than perimeter chances on their powerplays, the disciplined Melbourne defense breaking up anything in the interior. Peers was largely able to corral chances without allowing rebounds, when she did allow a rebound, the Ice defense was on hand to clear the danger and prevent secondary opportunities.

King found herself called into action to stop another breakaway attempt, this time from Ashlie Aparicio. The Ice winger tried to open up the five-hole by cutting across the goal, but King was once again able to track the puck well and make the save.

After a boarding call on Marnie Pullin, Perth were once again on the powerplay. But once again, Melbourne would generate grade-A scoring chances on the penalty kill. Aparicio and Julien created a two-on-one, Julien set up Aparicio for the one-timer which King saved, along with Julien’s follow up shovel backhand attempt. King was determined to keep the Inferno in the contest.

Shortly afterwards, Perth finally generated a shot from the interior on the powerplay. Nora Maclaine again found herself with the puck between the hash marks, and again went top-shelf glove-side on Peers. A beautiful bar-down shot at 2:13 on the powerplay assisted by Scala and Moulton. Ah Maclaine, you’ve done it again.

Perth were able to generate another two-on-one opportunity, but were thwarted by both Peers and the post. With a minute remaining the Ice were happy to play keep-away with the puck to frustrate Perth’s comeback attempts.

Despite having to kill off four penalties, Melbourne dominated the shot-count in the third period 18-10. That gave them a 64% shot share for the period, and 61% for the game.

Both teams will no doubt be encouraged by the performance of their rookie goaltenders this season. Peers was excellent for Melbourne and King kept the Inferno in this one and very nearly stole the result for her team. In the end the teams finished the postseason in the same position as the regular season, third for Melbourne, and fourth for Perth.

This was not a game in which the teams played for pride as if the losing team was undeserving of being proud of their accomplishments this season. All five teams in the competition fought valiantly, giving both partisan and neutral fans plenty to cheer for throughout the season.

The skill on display the entire weekend was beautiful to watch, and no doubt, for young female fans, inspiring. After a chance meeting with Melbourne Ice players Jenelle and Georgia Carson following the match, they both declared that women’s hockey was the winner here, and I wholeheartedly agree.

If you want to watch a replay, the AWIHL broadcast all of the games via their YouTube channel. Please be sure to subscribe. Thanks for helping them reach their goal of 1,000 subscribers prior to the finals!