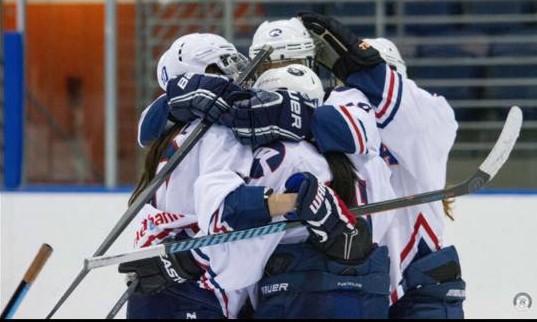 Alivia Del Basso was in fine form on Saturday night, as the Melbourne Ice opened their AWIHL season with a 6-4 victory against the Sydney Sirens at the O’Brien Group Arena. Alivia opened the scoring early on, before showing great chemistry with import debutant, Carly Rolph who scored a pair. The Sirens bombarded the Ice net with 50 shots on goal but ultimately weren’t able to steal the win. The Sirens’ aggressive, offensive breed of hockey didn’t do them any favours Sunday. The six penalties called against their team may not have proved crucial, but it certainly disrupted the flow of their game. The combination of Del Basso, Rolph and Shona Powell proved too strong for the Sirens; with all three walking away with goals and assists to their names, as the Ice secured a 7-5 win. The Sirens and Ice weren’t the only teams in a close battle this weekend as the Goannas and Adrenaline both staged comebacks to force shootouts. Saturday saw the Goannas race out to a 3-1 lead only to have the Adrenaline claw back 3-3 with 14 minutes to go. The Goannas took the lead again two more times of which rookie Abi Brown scored her first goal in a Goannas Uniform of which everyone thought could be the game winner at 5-4. Adrenaline coach Joey Rezek had other plans as he called a timeout and pulled his goalie. The move pulled off as the Adrenaline tied the game with less than a second left on the clock. Adrenaline Kirsty Venus managed to get the game winner as the fourth shooter completing a gutsy effort by both teams.

Sunday would see a role reversal. This time the Goannas staging the comeback from a 3-0 deficit. They scored three unanswered to force yet another shootout but the streak would end there as the Adrenaline put their shootout skills to work again emerging with the 4-3 win. The AWIHL will be back in two weeks November 7th and 8th as the Adelaide Adrenaline head to Sydney and the Goannas head south to Melbourne. For the full AWIHL schedule go to AWIHL 2015 Schedule Article Courtesy of Ryan Darnley