The Sydney Sirens have punched their ticket to the gold medal match with a convincing 14-8 win over the Perth Inferno. The game featured a whopping 9 special teams goals, including 8 powerplay goals (Sydney went 6/7, 85.7%; Perth went 2/6, 33.3%), and 1 shorthanded goal (Perth).

The Sirens enjoyed raucous support from their loyal fans who had made the trip from Sydney. Vuvuzelas, cowbells and air-horns were all audible throughout the contest. In our preview we mentioned that this game would likely be the highest scoring game of the weekend due to Perth and Sydney’s propensity for high-event hockey. For once, regular season tendencies continued into the playoffs. 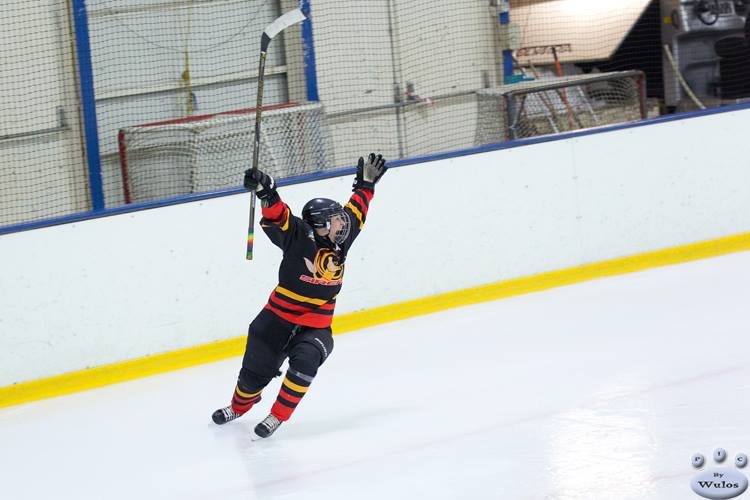 The scoring started early when Inferno skater Molly Lukowiak went to the penalty box for slashing at 19:18 of the first. 16 seconds later, Sarah Edney scored on the powerplay, assisted by Kayla Nielsen and Nadine Edney (the official scoring doesn’t currently include Nielsen (#20)).

Nora Maclaine tied it up for Perth on the powerplay at 13:44. Perth’s star import banged home a rebound off an Elizabeth Scala shot. Courtney Moulton had the secondary assist on the play (the official scoring gives the lone assist to Moulton, but Scala (#27) took the shot which generated the rebound).

Parity was restored, but would only last a mere 8 seconds before Nadine Edney stole the puck off Perth’s won faceoff and went in on Sydney Fricker on a partial breakaway. Fricker saved the initial shot, but Kayla Nielsen sent the rebound up and over Fricker’s head and into the net at 13:36. Sydney once again had the lead, a lead which they would not relinquish for the duration of the match.

Kayla Nielsen was far from finished, a few minutes later she showed why she topped the league in scoring, blasting a slap-shot from the top of the right faceoff circle past Fricker to double Sydney’s advantage. Assists went to Amelia Matheson and Nadine Edney at 10:19, and with less than half a period in the books, Sydney fans were officially on hat-trick watch.

Perth never quit throughout this contest, and made it a one-goal contest just over three minutes later. Michelle Clark-Crumpton took the puck from her own zone in a two-on-two situation, then used her silky skating to side-step one defender, generate a rebound which Elizabeth Scala made no mistake in putting past Tina Girdler to make it a 3-2 game.

Sydney went to the powerplay a few minutes later, and once again were able to convert, this time through Ebony Brunt off another rebound. 4-2 at 4:20, assists to Amelia Matheson and Sharna Godfrey.

Two minutes later, Sharna Godfrey went on a spectacular end-to-end rush, cutting from the middle of the ice to the right faceoff circle where she deposited a perfectly placed wrist shot to Fricker’s stick-side and into the net. 5-2 Sydney at 2:04.

When Perth’s Elizabeth Scala went to the penalty box for slashing, few would have suspected that it would be the Inferno who would next light the lamp. However Captain Courtney Moulton pressured Girdler into misplaying the puck and was able to muscle the puck through the Sydney defender’s stick and into the yawning cage. It was the perfect time for Perth to score their second shorthanded goal of the season. The lead had been cut to 5-3 with 44 seconds left in the period.

In what was a theme in the game, Sydney were able to score immediately afterwards, flexing their league-best offensive muscle. Sarah Edney was able to gain the zone on the powerplay, generate a rebound, and put a backhand shot past Fricker to double up the Inferno 6-3. The assist went to Nadine Edney at 0:13.

At the end of the period with Sydney again in the offensive zone, Fricker stretched out to cover the puck and appeared to suffer an arm/hand/wrist injury as the buzzer sounded. Hopefully the injury isn’t serious, Fricker would be on the bench to start the second period.

Perth came out firing to start the middle period, and it would take just 93 seconds for them to see reward for their efforts. Maclaine saw her inital shot from the right faceoff circle blocked, regained control of the puck in the slot, generated a rebound, and put the puck stick-side on Girdler. 6-4 at 18:27, assists to Moulton and Isla Malcolm.

Less than a minute later, Sharna Godfrey restored the three-goal lead. Godfrey showed off her blazing speed to create a two-on-one opportunity, before putting the puck top-cheddar over Sasha King’s glove. 7-4 Sydney at 17:41 with the assist to Amelia Matheson.

Ten minutes later Sydney scored their fourth powerplay goal of the game, and again the Edney’s were heavily involved. Liz Chia moved the puck up to Sarah Edney who did well to gain the zone, taking her left hand off her stick to protect the puck before placing a backhand pass on to Nadine Edney’s tape in the slot. King had no chance and Sydney had an 8-4 lead with 7:48 remaining in the period.

17 seconds later the game had its first hat-trick, Sharna Godfrey again going high-glove top-cheddar from a tight angle. 9-4 the score, with the assist to Sarah Edney.

Anna Badaoui put Sydney into double-digits a few minutes later. King appeared to be screened and Badaoui put her shot five-hole and into the back of the net. Ava Calabria was credited with the assist at 4:11.

Courtney Moulton gave the Inferno fans hope and something to cheer about when a three-on-one developed into a breakaway, Maclaine drawing the defender before placing a perfectly weighted pass into Moulton’s path. Moulton went high-glove, bar-down to make it a 10-5 game with 2:25 remaining in the second.

Yet again, Sydney staved off any potential Perth momentum by scoring 29 seconds later, Kayla Nielsen becoming the game’s second hat-trick hero. After receiving the puck from Chia in the defensive zone, she raced up the ice and was able to cut into the front of the net all alone, putting the puck through the five hole. 11-5 Sydney at 1:56.

43 seconds later the game had it’s third hat-trick hero, Sarah Edney joining the club. If there is a clip that sums up the game, this would be it. Edney stumbles in the offensive zone, the defense relaxes, Edney recovers and is able to cut to the net unimpeded, putting a backhand shot past King. 12-5 Sydney with just over a period of play remaining.

Isla Malcolm would pull one back prior to the period ending, the recipient of a brilliant cross-crease pass from Maclaine that gave her all sorts of room to go backhand-forehand and put the puck under Girdler’s glove. 12-6 at 1:05, the secondary assist credited to Moulton.

Perth refused to lay down and surrender, Michelle Clark-Crumpton scored on the powerplay off another rebound generated by Maclaine.

The 12-7 score became 12-8 a few minutes later when Elizabeth Scala roofed a backhand shot on the breakaway. Maclaine showed incredible nerve to avoid pressure from the Siren’s forechecking forwards, before sending a beautifully weighted saucer-pass, springing Scala on the breakaway. It was Maclaine’s fourth assist and sixth point of the game.

With half a period remaining, Perth had a glimmer of hope. That was extinguished with another two Sirens powerplay goals in quick succession. Nadine Edney added to her tally with a fourth from a tight angle.

And a little over two minutes later, Anna Badaoui added to her tally with a controversial goal. The Inferno players were clearly upset with the decision to allow the goal despite some possible goaltender interference on the play.

Perth will look to match last year’s third-place finish when they battle the Melbourne Ice. They will have their work cut out for them, but can take some confidence from their play against them in Perth earlier in the month.

Fans can buy tickets to the bronze medal game and championship game from finals.awihllive.com. The tickets are very reasonably priced and it’s a great way to watch the greatest live sport on earth, escape the capricious Melbourne weather, and spend a Sunday afternoon in a family-friendly environment.

If you can’t get to Docklands to watch the games, the AWIHL are broadcasting the games via their YouTube channel. Please be sure to subscribe.