The Adelaide Rush will be playing for the championship after a stunning 4-2 win over the Melbourne Ice. Although Adelaide finished ahead of Melbourne in the regular season standings, the Ice entered the matchup having beaten the Rush twice over the final weekend of the season.

Adelaide enjoyed a large amount of crowd support that rivalled even that of the home team, due in no small part to many neutrals choosing to lend their support to the visitors. In our preview we mentioned that this game could be the lowest scoring of the playoffs if regular season trends continued. After the result from the Sydney Sirens vs Perth Inferno game, we are currently two-for-two. 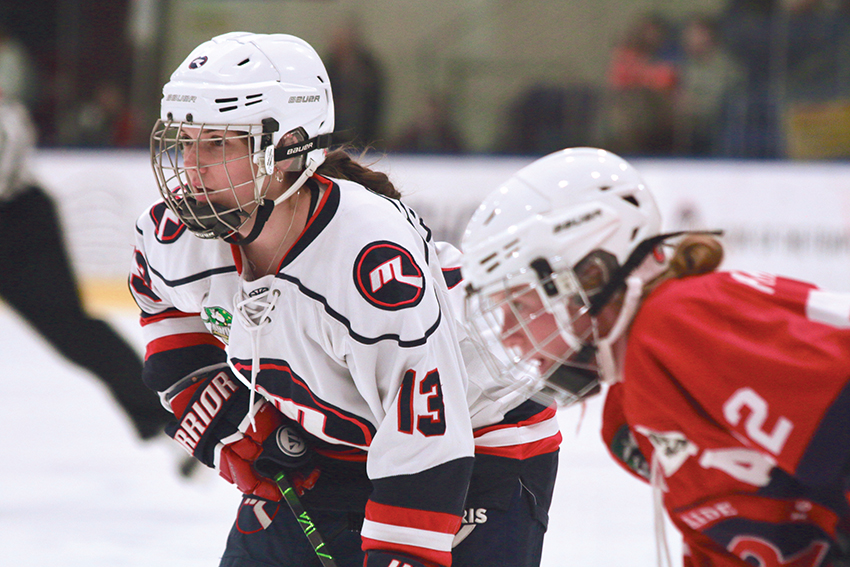 The two best defences in the league didn’t give each other much room early on, but it was Ice captain Christina Julien who generated the first grade-A scoring chance. The star centre skated to the hash marks and fired a wrister on net. Goaltender Michelle Coonan stopped both the initial shot and the subsequent rebound to keep scores level.

The physical play from the two regular season games continued in this game, with both teams trading big hits, none bigger than this crunching check by Ice defender Georgia Moore on the Rush’s Elizabeth Aveson.

Both teams did well limiting shots to the perimeter and breaking up the cycle. It would take over 13 minutes before the game saw it’s first goal and it was worth the wait. Rylie Padjen broke up a Rush pass in the neutral zone, carried it towards the left faceoff circle, and wired a wrister above Coonan’s blocker and into the back of the net. 1-0 Adelaide, unassisted at 6:24.

Melbourne had the opportunity to double their advantage towards the end of the period with a pair of powerplays, but were thwarted by both Coonan and the Rush’s stellar defending.

The period finished with Melbourne well in control of the shots, leading Adelaide 10-3 in the category; a shot-share of 76.9%.

Melbourne continued to pile on the pressure in the middle frame, but Coonan ensured the game didn’t get out of hand, showing off the leather with this fine save off a Sarah Dash attempt from a tight angle.

However, just a minute later, Christina Julien took matters into her own hands, receiving a neutral zone pass, and then using her blistering speed to split the defenders and go in all alone on Coonan. This time she would not be denied, cutting across the net before going backhand roof. 2-0 Melbourne at 17:47 with assists to Ashley Aparicio and Georgia Moore.

Shortly after the goal the Ice went to the powerplay once again but were thwarted by the Rush’s stifling defense. After killing off the penalty Adelaide’s Sasha Lutz won an offensive zone faceoff, Tash Farrier fired an awkward shot on net that Jenelle Carson could only block, and Lutz collected the rebound between the hash-marks and fired it stick side into the net. Melbourne’s lead was halved, 2-1 at 14:47 of the second.

Adelaide would send Melbourne to the powerplay twice more in the period, and although Melbourne had excellent zone time on each, Adelaide maintained a disciplined box-formation to keep chances to the outside. Sasha Lutz brought the Rush fans to their feet late in a penalty kill when she decided to go through Nicole Jones rather than around her.

The temperature of the game continued to rise with extracurricular activities after whistles. Neither team was backing down in this confrontation. 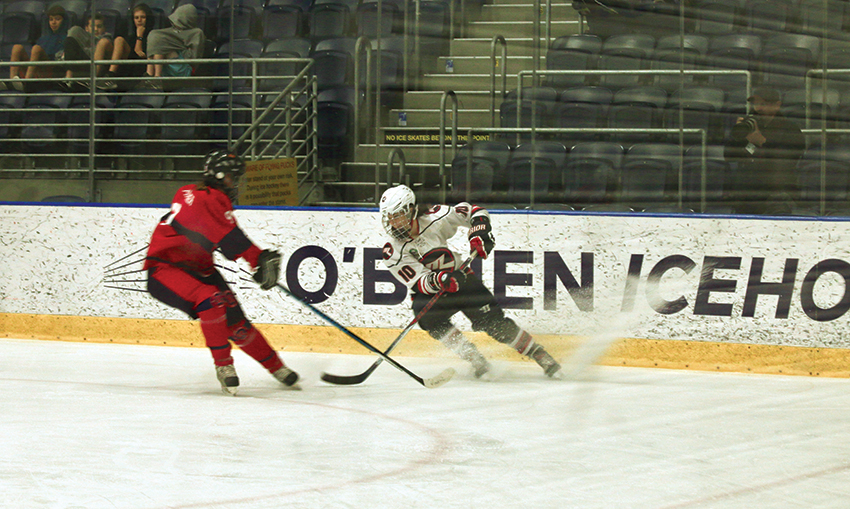 Although Adelaide failed to convert with the two woman-advantage, Melbourne were tiring. An equaliser seemed inevitable. At 16:05 Adelaide’s dynamic duo of Farrier and Lutz connected again. Farrier cycled the puck to Lutz in the corner below the goal line, and Lutz returned the pass to Farrier at the right-faceoff dot where she collected and fired the puck in one smooth motion far-side past the stick of Carson.

Melbourne would go to the powerplay for the seventh time in the game under a minute later, but again would be frustrated in their attempts to regain the lead.

Slowly, but surely, Adelaide started to dominate possession of the puck, spending swathes of time swarming the offensive zone. Jenelle Carson had to be excellent on several occasions to maintain the deadlock.

When both Rylie Padjen (hooking) and Megan Eady (cross-checking) took penalties within 34 seconds of each other (at 7:40 and 7:06 respectively), Adelaide had a 5-on-3 powerplay for the second time in the game. The contest saw it’s first powerplay goal at 6:31, Sasha Lutz banging home a Tash Farrier rebound. The secondary assist was credited to Natalie Ayris.

Melbourne would take yet another penalty at 3:39. Although Adelaide controlled the puck in the zone, they could not add to their advantage, seemingly content to allow time to expire.

Then, with the goalie pulled for the extra attacker, the AWIHL saw an empty net goal for the first time this season as Adelaide iced the game. Farrier and Lutz were again involved, Lutz with the diving assist, Farrier with the goal from the Mustangs logo behind centre-ice. 4-2 Adelaide at 0:22.

Melbourne will face the Perth Inferno in the consolation match today at 3:00pm. Both teams matched up against each other well in a back-to-back set in Perth. The stifling Melbourne defense will face a dynamic Perth offense.

With their defeat of the reigning champion Melbourne Ice, Adelaide will be looking to win a seventh championship when they face the Sydney Sirens. It would be the first title for Adelaide since 2012 when they played as the Adelaide Adrenaline, and would tie Melbourne with the most championships in AWIHL history. Sydney will be looking to win their second championship, and first since 2017. The final will see the league’s best offense (Sydney) matched up against the league’s best defense (Adelaide); it will be intriguing to see which philosophy wins out on this occasion.

Fans can buy tickets to the bronze medal game and championship game from finals.awihllive.com. The tickets are very reasonably priced and it’s a great way to watch the greatest live sport on earth, escape the capricious Melbourne weather, and spend a Sunday afternoon in a family-friendly environment.

If you can’t get to Docklands to watch the games, the AWIHL are broadcasting the games via their YouTube channel. Please be sure to subscribe.