When we first start playing the game what do we try to do? We try to score goals. We shoot as hard as we can in to the goals or against the boards. We dream of scoring the winning goal in overtime. We dream of offensive heroics.  Long has been the notion that a defenceman has a different mindset:

The game of ice hockey continues to evolve and one of the biggest changes to the game is the role and skills of defenceman. This seismic shift can be attributed to two guys who dominated the position in the early 2000’s; Nichlas Lidstrom and Scott Niedermeyer. Between these two they have won 3 Olympic Gold Medals, 8 Stanley cups, 8 Norris Trophy’s for the NHL’s top defenceman, and 2 Conn Smyth Trophy’s for the NHL’s play-off MVP. They played the game at such a level that they changed the perception of what someone in the role should be capable of. 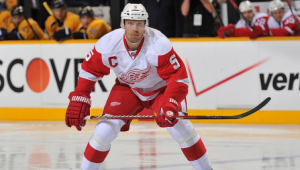 One only has to look at this year’s NHL scoring leaders to see things have changed when it comes to a defenceman’s role in generating offence. Of the Top 20 scorers for the 2016 regular season 3 are defenceman; unbelievably Erik Karlsson finished tied with Joe Thornton for 4th overall with 82 points.   Our AIHL is following suit with seven defenceman averaging over a point per game during the 2015 season; Newcastle’s Jan Safar leading the way with 56 points in 26 games.   It is an exciting time in Australian Ice Hockey as we are witnessing a changing of the guard on the blueline.

Our two greatest home grown defenceman, Mark Rummukainen and Josh Harding, are getting ready to hand the reigns over to some exceptional talent. The likes of Jamie Woodman, Zack Boyle, Jimmie Byers, and Jack Carpenter will be the backbone of the National Senior Team for years to come.  In our early years of playing the players who “fill the role” of defenceman seem to be the ones who don’t gravitate to the puck. The stronger skaters tend to be the forwards as they hunt the puck and get numerous scoring opportunities.  So when we get a bit older and start playing structured hockey what sort of player should look to move to the back end? What is a coach looking for from a defenceman?

Skating: Edgework is vital because a defenceman needs to move laterally as well as forwards and backwards. I would encourage all budding defenceman to spend more time on this skill than any other. The best players at this position can move “East to West” and this is imperative to playing at a high level. Gap control, playing 1-1’s, closing off 2-1’s, bottling the neutral zone; pinching in the offensive zone, quarterbacking the power play, one-timers, etc. all demand proper footwork and is the catalyst for offensive participation.  Transition from skating forwards to backwards, pivoting both ways, going from stopped to full stride backwards. These are skills that are only ever improved by practice; they are never mastered. They do not need a coach, a puck, a drill; they need commitment by an individual to get better.

Game awareness:  The own-zone breakouts, which in essence transition from defence to offence, is where a defenceman generally acts as the first line of attack for his team. Much like a midfielder in the AFL, he has to read the oncoming fore-check, maneuver his way through oncoming traffic, and hit a target who is in full in stride. All of this must be done in his or hers own stride because should the opponent’s fore-check change dramatically a pass may no longer be an option and the puck must continue to be skated up ice. 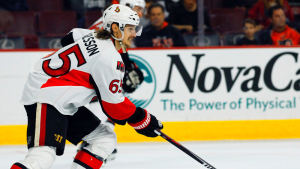 In the NHL they track zone exits as a key measure for defenceman and not surprising the guys who have the most amount of zone exits also have the highest percentage of possession maintained. The below graph is for the last four teams left in the 2016 Stanley Cup finals. The axis on the left shows the percentage of zone exits where possession has been maintained The bottom axis shows how many time per game the defenceman attempted to move the puck out of their end.

Offensive Awareness: You have taken care of your own end. You have got the puck through the neutral zone successfully. Your job is not over – and now it gets fun! Today’s defenceman must contribute to the offense in more ways than previous generations. I would encourage you to read these two articles by Kevin Shattenkirk because he shares the ice with the best players in the world and he has singled out a few of the very best defenceman.

Drew Doughty, Duncan Keith, Erik Karlsson, Shea Webber, PK Subban, Brent Burns, Kris Letang……… These guys are dynamic with the puck and they put up huge point totals every year because they are not scared to jump up in to the play. They hold the blueline, they quarterback a power play, they sneak back door, they make a 3-3 on 4-3 by jumping in to the rush. A big slap shot is great fun to practice but ultimately it does not define the players in the Shattenkirk stories (Webber excluded – man that guy has a rocket!). A quick wrister, walking the blue line, changing the angles, shooting for deflections, half slappers; these skills get you points and admiration from your teammates standing in front of the net. Practice these skills over and over again. When you shoot on a goalie in practice shoot the puck 2 ½ feet off the ice and if it goes in; great. If it doesn’t go in the net but a rebound lands at the goalies feet or back in to the slot; fantastic!  Click on the link below for an example.

To be a defenceman is not to block shots and watch others take the glory. To be a defenceman you need to read the play and pick your spots to contribute offensively without sacrificing your defensive responsibilities.

I coach defenceman. I value the position more than most as I grew up as a goalie and I know the value of the skills listed above. I also know that there is a shortage of good young Australian born defenceman and this needs to change. As countless players in Ginsberg and De Fris line up to be the starting centre on their state team I would encourage a few of you to move to the back end as it will be a little less competition for:

I can’t wait to see the next crop of defenceman come through and make it a strength of Australian Ice Hockey.

Eric Lien has coached in the AIHL and the Australian Men’s National Team.  He has a special interest in coaching and developing defenceman.