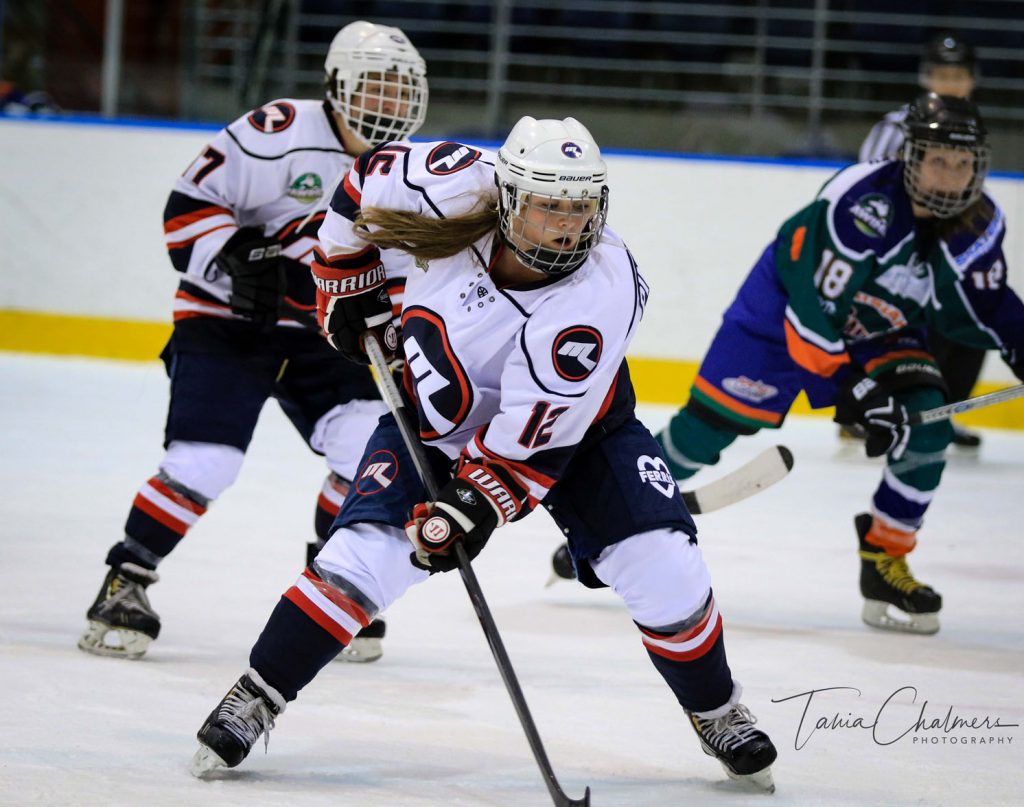 The Australian Women’s Ice Hockey League (AWIHL) starts off the summer season this weekend at O’Brien Group Arena, Docklands with Melbourne Ice Women’s (MIW) team competing against Brisbane Goannas. Champions for four years running, MIW’s winning streak came to an end earlier this year when the Sydney Sirens and Brisbane Goannas took first and second place. Determined to win back the McKowen Cup, MIW have stepped up their game, added some talented new players to their roster and have taken on two new imports. Three new recruits to the 2017/18 team are Jessica Pinkerton, Kim Lo and Kathrin (Ketta) Scheuerlein. They are excited to be playing and keen to show our fans why they have been chosen to represent Victoria’s premier women’s ice hockey team.

Sometimes our sources of inspiration are close to us while others we admire from afar. Jessica, our new import, said, ‘Throughout my journey I have faced a lot of adversity but the one thing that always got me through and inspired me to keep going was the love and passion my Dad showed me. He taught me a special kind of strength. Whenever I need inspiration I think of the countless hours my Dad devoted to my career, I think of the fun we’ve had and will continue to have. That’s what drives me.’

Kim’s inspiration comes from the team, ‘The best part about being selected for MIW is getting to train with some pretty talented ladies.’

Ketta’s role model is Hilary Knight, ‘She has always been my inspiration. She is amazing to watch. I love the way she forechecks the puck and creates scoring opportunities involving her whole line. She never gives up and plays aggressive and clever. She has also been quietly working in the background developing the NWHL.’

Dedication to the sport

Kim has risen to the new challenge of playing ice hockey with enthusiasm. ‘It all began about 5 years ago after watching a Rangers game in New York. Despite not knowing any of the rules it still seemed like a really fun, exciting, yet challenging sport to be a part of. I then enrolled in beginner hockey school at both OBGA and Oakleigh and soon enough hockey had taken over my life.’

Learning a new sport is rewarding but being an elite player requires dedication, ‘Preparation starts long before that opening game,’ Jessica said, ‘Physically, eating a balanced diet, staying hydrated and regular off ice training is very important. Emotionally, I try to get the proper amount of sleep each night, while sticking to a schedule keeps me accountable and helps me stay stress free! Mentally, I find it very important to visualise. Keeping a clear mind and setting goals helps me focus my energy to the season I am preparing for. Consistency is key, and finding time for rest and recovery is much needed.’

Ice hockey has been Ketta’s favourite sport since she was 14 years old. Having grown up in Germany, she moved to Melbourne in 2000 and began playing with the Oakleigh Angels. During this time, several ice rinks closed in Victoria so Ketta moved into inline hockey, playing in their national team. ‘I’ve been dying to get back on the ice so last year I made the decision to hang up my inline skates and go back to ice only. I have also been dreaming about being part of a professional hockey team like MIW and now here I am. I am really excited about new challenges I face as a player and being part of a new team.’

Our three new team members have some advice for any young girls and women who aspire to join MIW.

‘Always remember to have fun and live in the moment. Keep working and always remember it’s a game that’s meant to bring you joy.’ Jessica

‘Give it a go … it’s a good experience to train with other women and to get a feel of what it’s like to be coached at an elite level. And you never know, you may get selected!’ Kim

‘It is always about pushing to the next level.’ Ketta

Photo: New MIW import Jessica Pinkerton in action against the Goannas in the opening round of AWIHL 2017/18. Photo credit: Tania Chalmers Photography