It is with great sadness that we announce the passing of Dave Cunningham, another Legend of Australian Ice Hockey and IHA Life Member. Dave passed away on October 20th. Our condolences to his family and friends.
Dave Cunningham, a Champion Blackhawks Ice Hockey Club player, Coach and a member of the 1960 Australian Ice Hockey Winter Olympics Team.
Dave CUNNINGHAM
(1928-2020)
BORN OCTOBER 19TH, 1928 in Brunswick, Melbourne, Australia, to parents Mitchell Doig Cunningham and Ann Marsh Coates. Forward. Brother, Lawrence, born 1923, was also a hockey player. Cunningham, like Russ Jones, was among the young brigade who took up the game in the 1940s when competitive hockey had been suspended due to war. He first learnt under the guidance of John Tuckerman at the Sunday practices run by Melbourne Glaciarium in 1944-5. Tuckerman was a student of the game and he and his proteges practically lived ice hockey in those days.
Ice Hockey Guide reported general skating sessions in those years were used for ice hockey training. Players weaved, turned and twisted on crowded rinks, using first this edge, then that edge; hours of skating backwards, plus game theory. Cunningham soon possessed the automatic reflexes that mark the difference between a player and a champion, and they were largely attributed to the grounding he received under Tuckerman in those early years.
He first played for Northern Suburbs in 1946 and was selected to play for Victoria in his first season at the age of eighteen. The following year he crossed to the Glaciarium to become a founding player for the Blackhawks. He joined Tuckerman, its driving force, and Frosty Winter on a forward line that came to be regarded as the best ever. A decade later he and Noel Derrick were the only foundation players still playing at the club. Their line with Keith Jose was also “the crack attacking division” of its time.
Cunningham was a tough, aggressive competitor and heart-warming team man who was known as “the best Australian born player we have had”. Sports commentator Ron Casey selected Russ Jones and Cunningham as the babes of his 1948 All-Australian Team. Casey described them as “brilliant skaters, real opportunists, and Cunningham is perhaps the more versatile of the two”. [411] All the more remarkable because both had played only two seasons of competitive hockey.
Never omitted from a Victorian squad for which he was available, Dave Cunningham won four Goodall Cups and scored the most club goals in the first half-century of the VIHA. In that time, he also scored the most goals in a period, most goals in a game, and most points in a game. Top Point Scorer of the 1960 Australian Olympic Ice Hockey Team.
Life Member IHA, 2000. The Dave Cunningham Trophy was awarded annually to the Top Point Scorer in the IHV Premier A League from 2008 until 2013 when it reverted to the Hugh Spot Lloyd Perpetual Trophy. 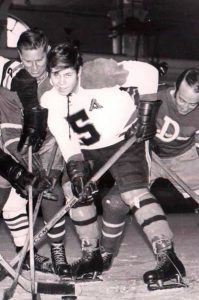